Oil: 3+2 technical signs and a double resistance point to a short term correction

There is no question the current oil rally has so far been impressive and DomiStock’s “go long” signal managed to provide some outstanding returns of between 18.83 -22.84%  (depending on whether the entry point was at the 3rd of August when the “go long” signal was given as a hedge or at August 4th when it was given as the dominant one). However, according to DomiStock there are now 3 technical signs and a double resistance that point to a potential short term correction.

2.       In the last 100 periods there has been no other 13-day “go long” DomiStock signal returning a higher than the current profit, which is an indication that oil’s performance entered statistically extreme levels

3.       In the last two sessions, oil’s price has been called modestly inflated* for the first time since June. The previous time DomiStock called oil price inflated, a correction followed.
* Getting a rate of 1 on the inflationary scale (with 3 being the most inflated)

Apart from the above, DomiStock automated support & resistance charting tool, charted not one but two resistance levels ahead for oil, at $50.54 and $51.67, with both resulting in important price corrections when last tested. 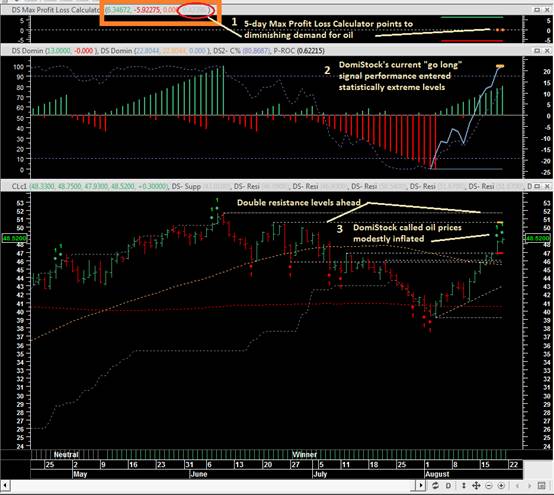 By turning to the hourly -data chart, we spot a couple of additional warning signs about oil.

1.       There is a 7-hour “go short” as a hedge signal given by DomiStock, so as to protect profits from the 37-hour “go long” signal which is the current dominant one. Unless that hedging signal is canceled, it will spill over to the daily chart, creating a bigger problem for oil.

2.       Last but not least, the current DomiStock long signal on the hourly data chart, is the longest since May, which, again, is statistically extreme and a sign of time inflation. 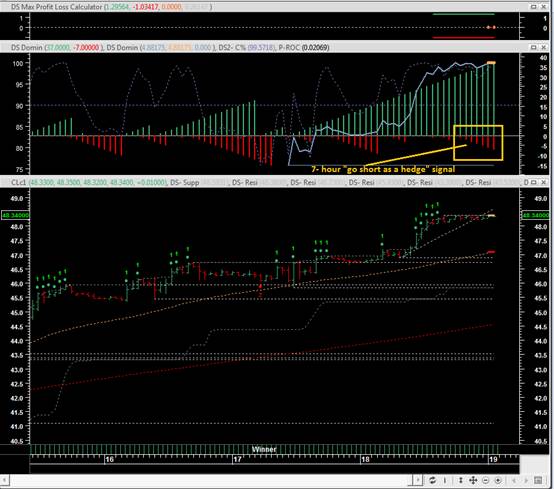 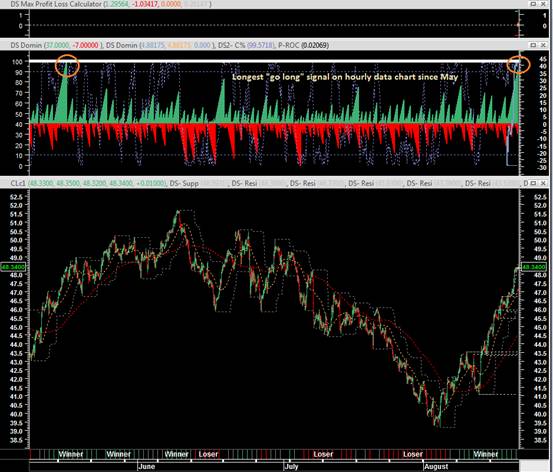