DomiStock is a fully Personalized Stock Analysis Robo System that empowers self-directed investors with innovative technology that helps building and managing personalized investment strategies to dominate the financial markets. To better help investors DomiStock provides two editions in one, the DomiStock Home™ and the DomiStock Pro™ one.

DomiStock Home™ is your best choice if you are a self-directed home trader and you need a quick and efficient technical analysis methodology with easy to use and reliable tools, suitable for all styles of trading, from the most defensive to the most aggressive and for any trading timeframe, from the long term to the intraday one.

Each system is accompanied by 3 tools:

Apart from each System’s unique tools, both of them share 4 tools:

In a nutshell DomiStock Pro offers:

As in the Home Edition Each system is accompanied by 3 tools:

Apart from each System’s unique tools, both of them share 4 tools:

2015
DomiStock was the technical analysis software (robo-advisor) of choice in the international research Behavioral Finance project entitled “Robo-Advisors and Individual Investors”, conducted in fall 2015 at Columbia University* and was found to have significantly helped traders to overcome their negative behavioral biases and rationalize their overall decision-making process.

Conclusion and results of the research.
The “Conclusion” on the final report of the project reads: “This research study showed that behavioral biases were influenced by the interaction of the investors with Robo-Advisors. Specifically, six out of the seven behavioral biases that were examined decreased significantly. Overconfidence & Wishful Thinking, Quasi-magical Thinking and Luck/Skill were slightly decreased, while Gambling Behavior, Home Bias and Disposition Effect were largely decreased. This is a very positive result showing that biases can be eliminated when investors interact with rational Robo-Advisors. Interestingly, Risk Tolerance was the only bias to increase. This can be attributed to the fact that investors felt more “safe” to take risk when having advanced software to advise them. This study also showed that apart from the change in behavioral biases the overall decision-making process of investors was affected by the Robo-Advisors”. 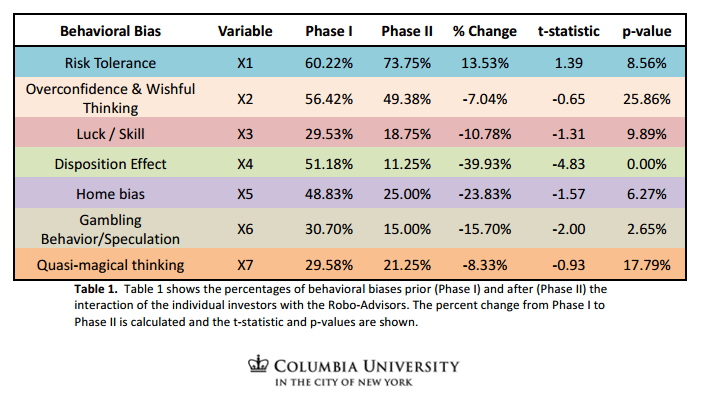 The main result drawn from this research project is that the all the behavioral biases (variables) that were examined are dependent since they changed as a result of the interaction between the correspondent and the Robo-Advisor.

Risk Tolerance increased by 15.33% and it was the only variable to increase from Phase I to Phase II. Several questions in the two questionnaires measured Risk Tolerance, such as Question 11 in Questionnaire 1: I carefully invest most of my money and take risks only when I trade a small percentage of it. The confidence interval for this result was calculated to be 91.44% (1 – p-value). One reasonable explanation for the increase in Risk Tolerance is that investors felt better equipped to trade when using the Robo-Advisors and, thus, willing to take more risk.

Overconfidence and Wishful Thinking decreased by 7.04% indicating that investors become less bias towards overconfidence after they interact with the Robo-Advisors. Overconfidence was measured by several questions such as Question 19 in Questionnaire 1: When trading I always put my instinct above anything else. Since overconfidence is a negative bias, this decrease in its value should be considered as a positive result.

The belief that success in trading is mostly due to luck than due to skill decreased by 10.78%. this decrease is again considered to be a positive result, since we are examining a negative bias.

The Disposition Effect Bias decreased by 39.93% indicating that investors became less likely to sell the winner stocks and keep the loser stocks. That was the biggest and probably the most important change in this study. The disposition effect describes one of the main fallacies in the decision making of private investors. Thus, such big decrease is a very positive result.

Home bias decreased by 23.83% which was the second most significant drop in this study. A possible explanation for this decrease is that access to the Robo-Advisor’s analysis made investors readier to search for financial opportunities more objectively.

Gambling Behavior and Speculation decreased by 15.70%. This is a significant decrease and a positive result, indicating that investors became more rational and less speculative after their interaction with the Robo-advisors.

2016
DomiStock was the technical analysis software of choice in the investment project entitled “Global Macro Multi-Asset Investment Fund”, that involved the creation and management of a multi-asset fund, conducted in spring 2016 at Columbia University. Two portfolios where constructed and tested with simulated trading and recorded annualized profits of 69,4% and 80,27% respectively.

Graphs and Table from the research. 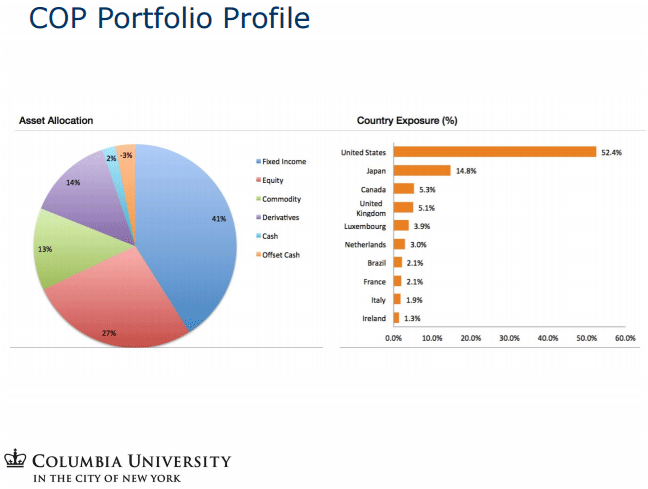 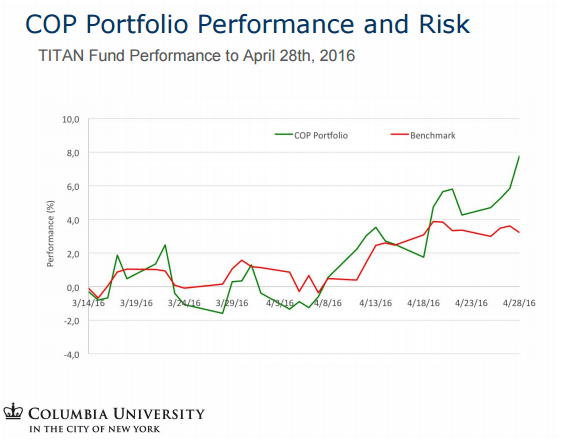 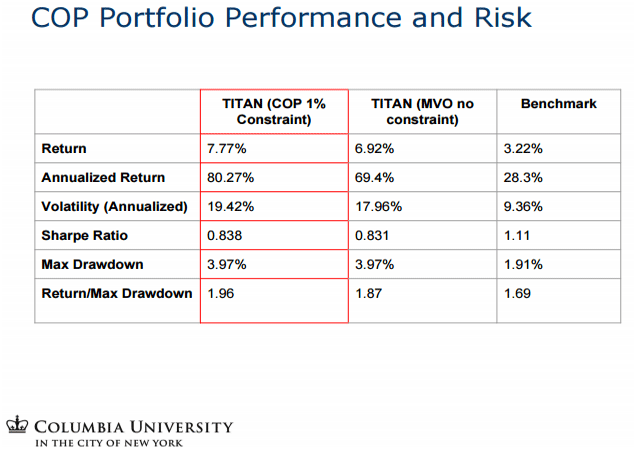 DomiStock and its outstanding profitability record

In Appendix 1 and 2 of DomiStock’s manual you can find the MetaStock System Tester Simulation Screenshots from tests with daily and intraday data on:

DomiStock was the outperformer in each and every simulation.

Apart from the above mentioned simulation tests, DomiStock was the technical analysis software of choice in the investment project entitled “Global Macro Multi-Asset Investment Fund”, that involved the creation and management of a multi-asset fund, conducted in spring 2016 at Columbia University. Two portfolios where constructed and tested with simulated trading and recorded annualized profits of 69,4% and 80,27% respectively.

Domistock is perfect for analysing stocks, ETFs, options, commodities, e-Minis, FOREX, futures and more. Since it comes as a MetaStock add on, the exchange cover is worldwide.

Why was DomiStock selected as the Robo-Advisor of choice at a Columbia University International Research Project?  This is the answer given at the chapter 4.6 of the project itself: